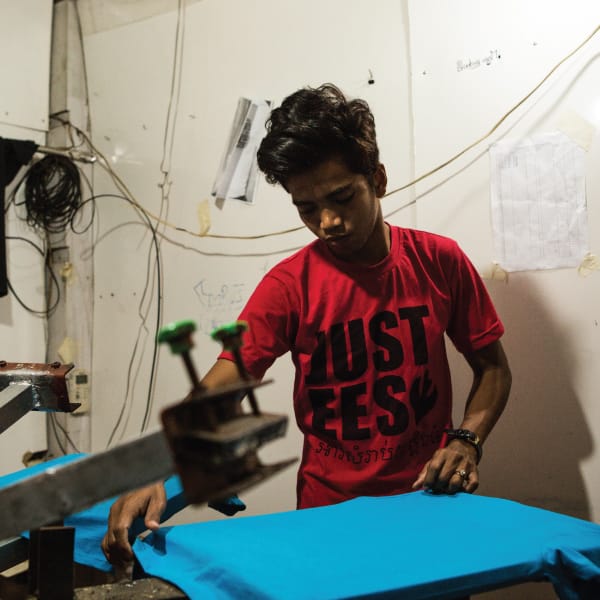 I am the oldest son in my family but my family has always been very poor.  My father is addicted to alcohol and my parents fight a lot. When I was younger I started to sniff glue to cover my hunger pains and got addicted. I went through a drug rehab program and was able to stop sniffing glue but I still didn’t have money to go to school.  I started working for Justees in 2009 and it has provided me with the money to go to school.

At Justees my responsibilities include screen printing, screen reclaiming, packaging, drying, and delivery.

My father died of a disease when I was only 8 years old and it has been very hard for my family to have enough money. Because we don’t have enough money I wasn’t able to go to school. One day a lady I knew introduced me to David at Justees.  He interviewed me and gave me a job, so now I work at Justees.

At Justees my responsibilities include drying, packaging, cleaning the screens, ironing, screen reclaiming and screen printing.  My favorite jobs are printing and pressing because they are easy and I enjoy them.  My favorite product is Justees branded t-shirt.

I live at home with my parents and 5 siblings. My father is a motor taxi driver which means he gives rides to people on the back of his motorbike. My mother doesn’t have a job.  Because my family doesn’t have a lot of money I wasn’t able to pay for my school fees. In 2015 I met a missionary in my community who befriended my family and introduced me to Justees. I have been working at Justees ever since and have been able to stay in school.

At Justees my responsibilities are screen printing, cleaning the screens, screen expose, drying, ironing, and delivery. My favorite job is printing because I feel it is teaching me a life skill. My favorite product is the Wage Peace t-shirt because I do not like war.

I come from a poor family. My father died when I was only 1 year old and my mother has always struggled to find enough money to support us. We didn’t have the money to cover my school fees. I met the youth worker from Justees and he learned about my situation and encouraged me to start working for Justees.  I started in February of 2017 and have been working and able to go to school ever since.

I found out about Justees through a lady who is a leader at the church I attend. She introduced me to David and I interviewed to get a job at Justees. I started working at Justees in February of 2017.

At Justees my responsibilities are screen reclaim, drying, ironing, and packaging. My favorite job at Justees is drying.  My favorite product is the Bystander t-shirt.

When Jomrarn came to justees he was poor, and lived in his extended familys house nearby then in a

university dorm. He finished year 12, then studied banking and finance, which Justees paid a half

scholarship for and the other half he worked off through his work. During his university time he quickly

became a leader in Justees and worked hard and took responsibility for the printing and the quality.

Last year he finished his degree and got a job in a bank. We hope that his success form working hard

and studying hard will lift his family out of poverty, and be an example to the other boys. Now

Jomrarn is busy at work, but he still finds time to help his church, his neighbours, and coach football

with a group of younger boys.

Vannak also came from the province to study in Phnom Penh. Sometimes his family could support him a

little, sometimes not. Justees gave him a stable income for his study. Vannak worked hard and was able

to finish year 12 and then went onto to study IT Systems at university. During this time Vannak was

organizing the printing. When he started 3 rd year university Vannak got a full time job at a large hotel

organizing their IT systems and troubleshooting there. He will finish his final year of university at night,

while he works during the day. Vannak also finds time to help at his church and play football with the

Justees football team. He is earning a good wage now and is able to help his family as well as have