We believe that people deserve equality and fairness no matter what their color, education, economic status is.

These values are key to how we run our business as well as the message we want to share with the world.

A Path Out of Poverty

We believe that people trapped in poverty can work themselves and their families out of povery with support, education and opportunities.

People escape poverty by taking advantage of opportunities they are give, not handouts they receive.

Mentorship of at Risk Youth

Many of the cultural and family problems in this culture can be traced back to male attitudes and learned behaviors. The young men who work for us have a great need to be mentored by someone who believes they can learn new habits and become more.

“If you want peace, work for justice.” — Pope Paul IV

Justees is a non profit vocational training and life skills development project in Phnom Penh, Cambodia, started by Servants teammates David Bryce and Steve Tripp in 2009.  At the time I (David) was working for a Drug Rehabilitation program here in Phnom Penh and was seeing the many issues men were dealing with in Cambodia. Men in Cambodia struggle with a wide range of issues including drug abuse, drinking, gambling, domestic violence, widespread unfaithfulness in marriage, lack of education and limited access to opportunities.

Justees started with a heart to serve men. My past work with youth and previous business experience combined with Steve’s knowledge of screen printing, and his passion for Justice issues led to the formation of Justees.

Justees started with 7 boys.  These boys graduated from the drug rehab program I was working with and we gave them a job with Justees screen printing t-shirts with justice messages on them.  These t-shirts are sold and shipped internationally, allowing the boys to gain valuable work experience and life skills. Their jobs at Justees also provide them with an income, allowing them to continue their studies at the government school.

Due to their past drug abuse many of the boys have had a slow start to their schooling. When they start our program many are 16-18 years old and have not progressed past grades 7-9.  They are under immense pressure from their families to stop school and work full time because they are already “of age”.  However, stopping school at this grade level will limit their earning potential to approximately $120 per month for the remainder of their lives. Finishing school provides them many more opportunities and the chance to work themselves and their families out of poverty.

We are working with male youth to address the widespread problems in male culture in Cambodia by building up and mentoring the next generation of men. Justees provides mentoring, accountability, and modeling of healthy male roles and responsibilities.

Justees creates simple handsewn t-shirts. We are intentional about fairly compensating the people involved in producing our shirts. The result is affordable and socially concious fashion that communicates a justice message.

Located in the Slums

Justees has their print shop located in one of Phnom Penh’s slum areas. The location makes it easier for our employees  to come and go from work and allows us to make connections with at other risk youth in the area. 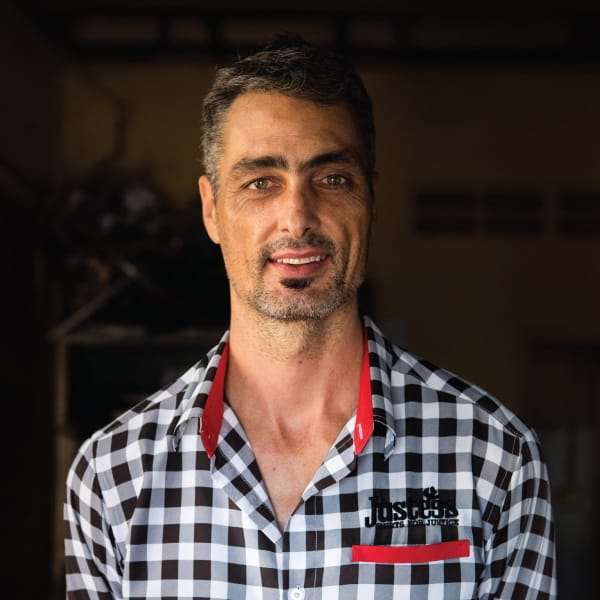 2David took a short term trip to Cambodia in 2004 where he was first introduced to the work of Servants.  At the time, he lived In Melbourne, Australia where he was working in the wine industry.  This trip rocked his world and shook up his perspective, when he saw how Servants was living with the poor and “doing life” with them.  This clicked and made sense to him.  David quit his job and gained experience working with drug users and homeless people in Melbourne, while preparing to head back to Cambodia.

In 2006 David and his wife Ruth and their daughter Abby (3 months) signed up to work with Servants and moved to a slum neighborhood in Phnom Penh.

After learning language, for the next 3 years in Phnom Penh, David worked with a drug rehab program targeted at helping teenage boys in the slums.  While working with this program he learned more about the needs of this group and how a breakdown in the male culture in Cambodian society has devastating effects on women, children, and the family unit.

In 2009 David and another Servant’s worker Steve Tripp started Justees because they were seeing boys graduate from the drug rehab program but not have the money to go to school.  Without an education and a way to escape poverty these same boys were always going to struggle.  Justees provided the opportunity to have a job that would provide enough money to continue their education while being mentored to be healthy men in Cambodian society.

David has always run Justees as a sustainable business.  He wants the boys working for him to see that hard work pays off and not to have a handout mentality.  It hasn’t always been easy, but David is excited when he can see the boys working at Justees grow, earn an education, and in time, pull themselves and their family out of poverty.

Meet Our Employees
Visit Our Store